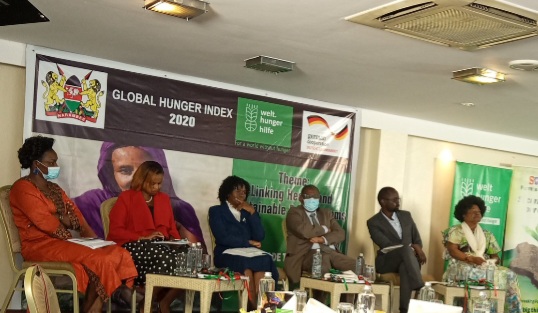 Organization of African Youth (OAY) Kenya participated in the launch of Global Hunger Index 2020 report which was held at Sarova Panafric Hotel on February 24th, 2020. Various organizations were represented at the launch whose theme was: Linking Health and Sustainable Food systems.

In line with the theme, participants underscored the importance of health and food for human survival. Hunger an epidemic that affect individuals of various groups depending on their background and levels of marginalization. People suffer from hunger not because they want to but because they lack information on how they can sit down and embrace agricultural production. The youths which form 35.7% of the total Kenyan Population have been forced to believe that agriculture is a dirty job and it belongs to the older people. The thought of carrying agricultural tools is often embarrassing to a young person who has gone to school. This is one of the beliefs that need to be confronted and be reversed. The youth play a central role as they offer over 60% of labour force in the country and, therefore, should be encouraged to venture into agriculture. Besides, for there to be change, agriculture should be made attractive.

The Global Hunger Index 2020 paints a grim picture of the Kenyan situation places Kenya at position 84 out of 107. In this regard, Kelvin Shingles, County Director of Welthungerhilfe, said that the world and Kenya is not on track to achieve zero hunger and questions should be asked why this is so and what we are not doing right. According to Martha Nyagaya, all sectors of the society should be encouraged to contribute in the fight against hunger. She specifically decried discriminatory cultural practices which stand in the way of the fight, for example where women eat less fanciful food such as the less fleshy parts of the chicken, and where they are made to eat after everybody else have eaten. She made an appeal for gender equality. She also rooted for information protection and empowerment of people as a tool for fighting global hunger.

The participants at the launch were in agreement that strategic partnerships form a strong base in the fight against hunger in Kenya and the world at large. They agreed to the saying that if you want to walk far, walk with others. Since the walk was proving not to be an easy one, it was abundantly clear that Kenya and many other countries needed others to walk with. Partnership are not only imperative in resource mobilization but they also form a strong base in ensuring the policies that help fight hunger are strengthened. Furthermore, they act as watchdogs in ensuring a goal is achieved.  In addition, partnerships can be used as a tool for capacity building at different levels of development initiatives and for bringing resilience in ending the world hunger. Global hunger is such a heavy load that cannot be fought alone.

Other solutions to the hunger situation in Kenya are the adoption of bottom-top approach which will make us have a clear understanding of the root causes of hunger and how to achieve zero hunger; and the use of indigenous knowledge which is a critical aspect on how we can produce food and also make it safe for consumption.